a walk around Tinamou cottage in Boquete Panama

5th of April 2020
what was high season is suddenly low season...all the guest are gone now and we hope safe in their houses in their country. Flowers for everybody in the whole world! Stay safe , stay healthy! http://coffeeadventures.net/tinamou.html
Posted by Terry van Niekerk Coffee Adventures Boquete at 11:09 PM No comments:

Hello all! well my first post of March 2020 was ..I think... cheerful except my write up about the Warbler migration...well that is still the same story, not a big migration at all..but of course most of my observation is on the farm, because of the big C quarantine. I hope when the rain comes and that will be soon, that we have some bigger migration groups coming through. But when I see other lists from other birders on E-bird...it is also slow over there.
Hawk migration was last week pretty good for us.
Mostly broad winged and Swainson's Hawks(picture).. and even a Zone -tailed Hawk pretty low fly over the meadow! 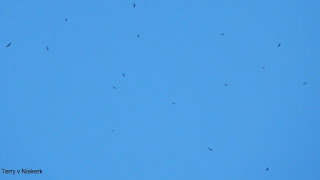 Rainy season is coming ..."our" birds know that...
This thick billed Euphonia male is fighting in the mirror of the car already for more than a week, poor thing, those hormones. 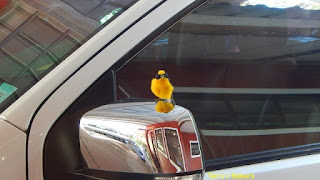 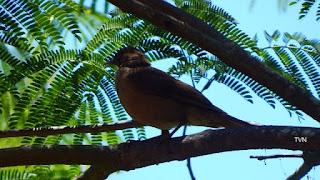 Then in one of the meadows I did see that a pair of white tipped Doves  have a nest with two eggs...I never knew that they make a nest so close to the ground, I wonder if that will be a succes. 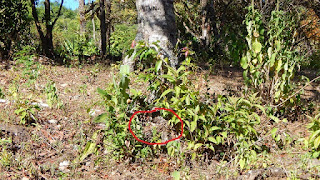 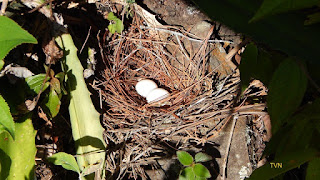 It's a weird time of the year, I was looking in our agenda and normally we would have now guests, trips and be busy. I feel sorry for the  people who are now at home and missing their vacation...but most of them are coming later..next year. Now it is important that we all stay healthy.
So suddenly I have time to go into our farm and enjoy the birds..although sometimes it is hard to enjoy when you watch the news. But the nature and birds around us relax ...I know ...we are lucky.

Down below the lists of the last two days, to give an impression what happens here..bird wise.
Also some pictures of the ornate Hawk Eagle  from one of my last birding trips  with a Russian couple.
Probably next time when I see him/her, she/he will be adult, her/his feathers are changing fast now. 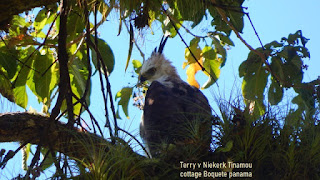 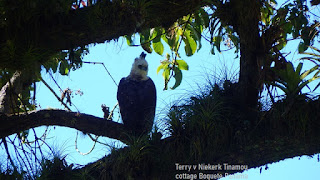 And I will end with a picture of this Tennessee Warbler out of honor for all the migration Warblers and other birds ...who are going to the north at this moment..hope they will arrive safe and make a lot of baby's. 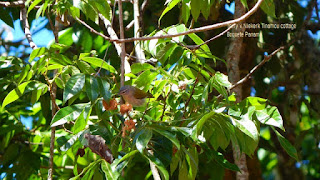 Greetings and strength from Terry
http://coffeeadventures.net/tinamou.html 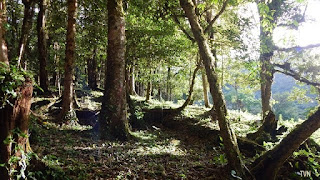 March started, exciting times will come soon , although..bird wise there is always something going on. We are in the second week of March...I must say..did have quit a bit of bird watching trips in different areas, but not too much migrant warblers...where are the big groups of Tennessee Warblers? It seems to get less... Ones in a while I do see a black burnian Warbler or a chestnut sided Warbler...but the big mixed flocks ...I miss them.

The amount of  resplendent Quetzales  and three wattled Bellbird  are overwhelming this season...huge amount of fruit on the trees for them, this will be a good year for them. The weather is a kind of crazy, we had some big showers in our dry season on the farm... so the garden, forest and meadows are green.. I did start with irrigation a few days ago. I am curious how our wet season will be.... 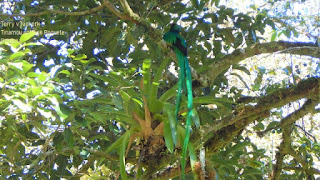 Did met really nice birdwatchers. 2 Couples discovered that they were really birdwatchers and are totally hooked... and another couple was already hooked.

A lot of fun with students in the age of 20ish... they loved the cloud forest, always  a good feeling that I can show the richness, the beauty. 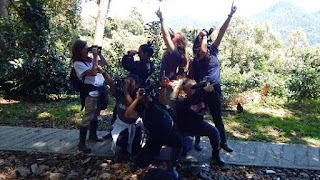 When I tell about this forest and about the birds that we see and not see but hear, I feel so grateful that I can do this and that I live it! 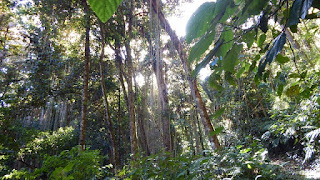 Good sightings of young three wattled Bellbirds, see above video and down below 2 pictures, they are trying to do displays, it's funny how they sound, like a boy who is getting a heavier  puber voice. 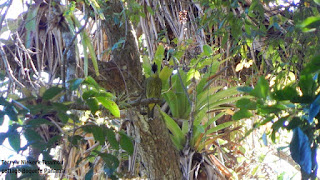 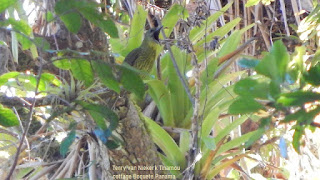 and then suddenly a white faced Capuchin Monkey is staring at us, always surprises in nature: 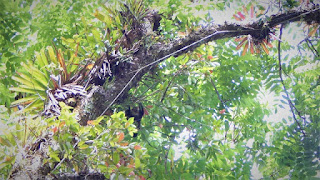 And so a short story of my first week of March 2020...I end with these love birds:
a pair of flame colored Tanagers 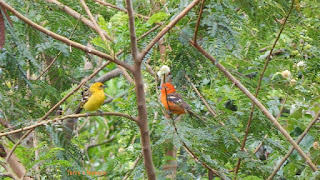 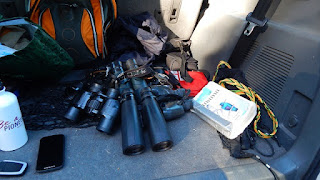 Hello everybody, so today I was up early. Hans was hiking the Quetzal trail from Boquete towards Cerro Punta today with  a nice french couple. Then I did drive to the other side of the trail (nearby Respingo ranger station) I did park the car and normally I will wait for them.Today I wanted to hike the trail by myself, it was a while ago that I did that  down hill . We don't do that, because when the weather gets bad... (rain) then the river  is getting high and it can be a problem to cross it. And then you should go back all the way. No car waiting for us there...so that is a hassle.
Normally I wait for Hans  and the hikers and mostly I enjoy myself with the birds and a lot of times "singing" indigenous men working on the fields. Except when it rains, then I sit in the car ...sometimes for 3 hours. Well that is part of the deal.
Today it was good weather and Hans did start around 8.45am  at the ranger station  in Boquete and I started at 7.55am on the other side . ( after 1.5 hours drive)
My hope was to see the silvery throated Jays (around the 2350 m and higher)... when I hike the trail with birders, mostly we are too late to see them or mostly we do the trail  for a day, but then the Boquete side. As a birder it is hard to go faster. I did see the Jays, lovely...not a good picture , because they were "angry birds", chasing each other... 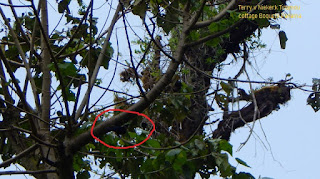 It was nice to be on the trail on my own...I realized that we are visiting this trail already 22 years.
Still very beautiful and unspoilt. On the Cerro Punta side more intensive agriculture and sneaky some forest did disappear there..but the trail after Respingo ranger station is still the same.. nobody can touch that..only wind and  rain.
I did not have the whole day...maybe next time and it was nice to hike also a bit... was amazed that the three wattled Bellbirds were so deep in the forest.
Everywhere Quetzales, this is the time that they do their displays. Even I did see already a pair making a nest 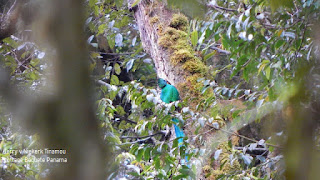 ...it will be a good year for the Quetzales and Bellbirds . A lot of Bambito fruit.
Fortunately Hans and the French hikers did see male Quetzales flying and took some pictures.
They were surprised to see me (they are guest in Tinamou cottage, so I met them already before ) and even more surprised that I had coffee for them and fresh baked Cookies ("speculaas" Dutch cookie).
I moved on ...some mixed flocks, but not a lot. Nice ruddy Treerunner eating a bug 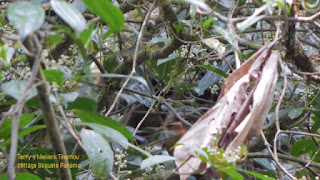 And common Chlorospingus who was showing off for me... 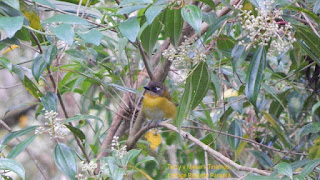 I took some pictures on the trail..that I want to share: 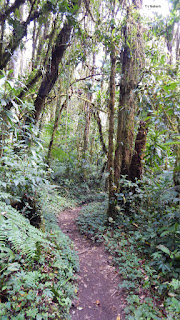 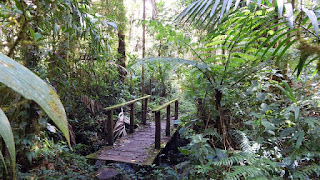 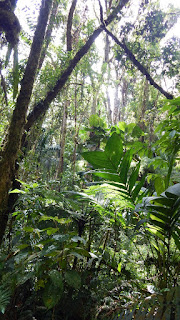 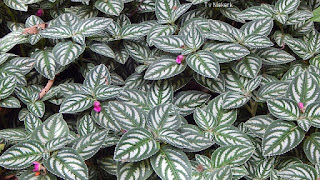 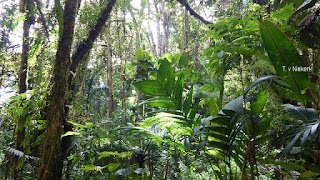 Down below my list of this morning.... greetings from Terry
http://coffeeadventures.net/tinamou.html

Another exciting morning...I was a little bit busy this morning, but I still had time around 10ish to go to the area la India, a part of Boquete. With my birding dog Spot and have a nice time alone in the mountains... it was hot, but mainly I was in the forest and of course I don't walk fast.

I did start with a "national Geografic" moment ...two violet Sabrewings had a nice display..never did see that so beautiful. They flew up high in the sky and dove down very fast together...but high in the blue sky they did a dance.

I did see two white tailed Emerald males fighting with each other, the gorgets of both males were so deep emerald ..it did hurt my eyes :)

On my way back I met our neighbour of our other farm, while I was talking with him about serious stuff, I did see a shade of a bigger bird flying over...when I did say goodbye ..I walked along a big tree, some birds were upset ...like the white tailed Emeralds and I thought about the shade... looked up and yes two yellow eyes were staring at me...well you see the video above...

Have a good Sunday, mine cannot go wrong anymore. 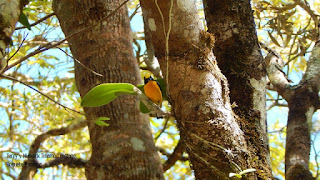 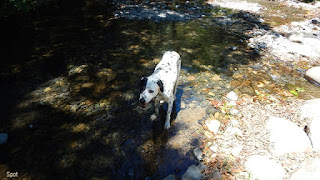 Hello everybody, I don't have a lot of time to write a post, but I thought I share the male and female lesser Goldfinch in love this morning in the garden.

Hello everybody...I have also a youtube channel , where I post my short videos.
I am not so active in making it public, but I thought... well I can tell you ...
https://www.youtube.com/channel/UC9ZYxy5vwWpJFVR27qQGPvw
It's about mainly birds(what a surprise 👀)
Greetings from Terry
http://coffeeadventures.net/tinamou.html

By the way...this picture of the northern Emerald Toucanet I took yesterday.... 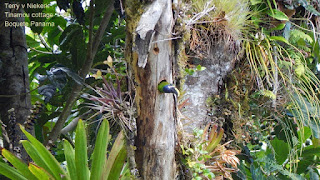